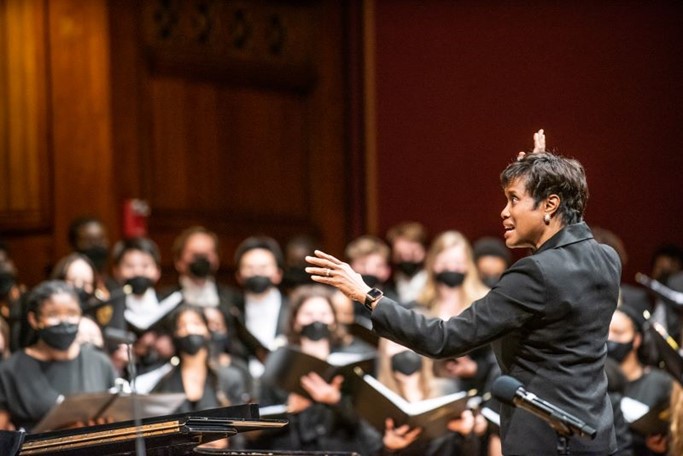 Rosephanye Powell conducts the combined choruses of Harvard-Radcliffe Collegium Musicum, Kuumba Singers of Harvard College, Radcliffe Choral Society, Harvard Glee Club and the Aeolians of Oakwood University in the world premiere of "Quiet Revolutionary," a new work by Rosephanye Powell, commissioned in honor of Eileen Southern by the Harvard University Department of Music. Credit: Michele Stapleton/Office for the Arts at Harvard

Rosephanye Powell, professor of voice in the Department of Music in the College of Liberal Arts at Auburn University, has received one of the nation’s highest honors in music education.

The Luise Vosgerchian Teaching Award is awarded by the Office for the Arts at Harvard University to individuals who display “selfless commitment, artistic conscience, a constant renewal of approach to subject matter, ability to motivate in a positive and creative way, a sincere interest in the development of the whole person and the ability to present musical knowledge in a way that is applicable to other disciplines.” 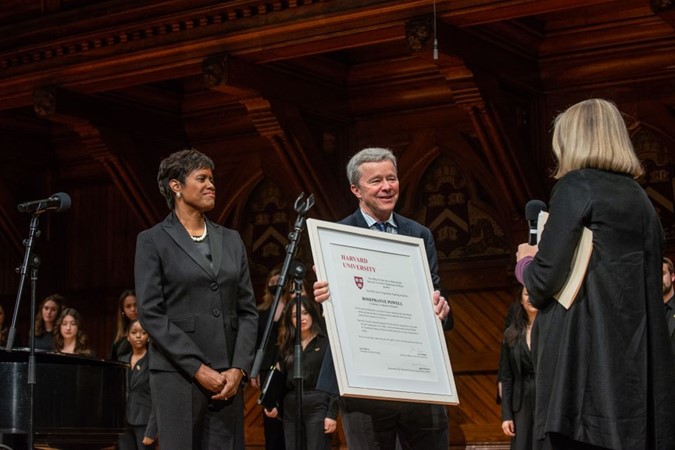 “To be the recipient of the prestigious Luise Vosgerchian Teaching Award from Harvard University, our nation’s oldest and most distinguished institution, is an honor that I could never have imagined,” Powell said. “And to have received it on the very night that Harvard University celebrated my heroine in academia, Dr. Eileen Southern, who authored the book that gave birth to the development of Black music studies at universities throughout the nation, was a pinnacle moment that I will forever cherish.”

The Lift Ev’ry Voice concert is part of Harvard’s Eileen Southern Initiative, a collaborative project to honor the path making educator of the same name. Southern was the first African American woman to earn a PhD in musicology, become a tenured professor of Harvard’s Faculty of Arts and Sciences and serve as chair of the African and African American Studies Department. A musicologist and author of “The Music of Black Americans: A History,” Southern paved the way for Black music studies in the U.S.

As part of the concert, Powell conducted her work “To Sit and Dream” with text by Langston Hughes, as well as “Quiet Revolutionary,” compositions she composed for Harvard University in honor of Eileen Southern.

In my life in choral music, witnessing Rosephanye’s work is the closest I’ve probably ever felt to being in divine presence. ~ Andrew Clark
Director of Choral Activities, Department of Music at Harvard University

“She hit us like a meteor and set our students’ souls aflame," Clark said. "She had Collegium singers weeping within ten minutes of rehearsing her Hughes setting. She saw right into their hearts. A combination of spiritual depth, genuine humility, virtuosity of craft and pedagogical brilliance.”

Powell teaches applied voice, art song literature and vocal pedagogy at Auburn. She also serves as the Women’s Chorus conductor and the AU Gospel Choir’s co-conductor. Her primary performance and research interests include the African American spiritual, the art songs of William Grant Still and voice-care concerns for choral directors.

Outside of academia, Powell is hailed as one of America’s premier women composers of choral music. She has performed internationally, and her work is consistently in high demand at choral festivals around the country, as well as in national and international publications.

“The Auburn University Music Department is privileged and honored to have Dr. Rosephanye Powell on faculty,” Department of Music Chair Richard Good said. “Dr. Powell is an internationally acclaimed artist in the vocal/choral area and an amazing teacher to her applied students. She is an outstanding vocalist, musician, composer and conductor. She truly can do it all, and on such a high level, while she remains incredibly humble.”