Experiencing 20-40 seizures a day, parents Annie Campbell and Ben Belcher knew their infant was struggling. They took their son Emmett to a neurologist in Georgia who prescribed anti-seizure medications, which did not work on little Emmett. What Emmett has is so rare that many neurologists go their whole career without ever treating a patient with the condition.

“The first four months were horrible because the doctor just kept throwing medicines at the problem and it wasn't getting any better,” Campbell recalled.

After seeking other medical evaluations, Emmett was diagnosed with Hemimegalencephaly (HME), which is a rare neurological condition in which one hemisphere of the brain is enlarged and malformed. According to the National Organization for Rare Disorders, “The structure of the brain on the affected side may be markedly abnormal or show only subtle changes. In either case, as a consequence of this size and structural differences, the enlarged brain tissue causes frequent seizures, often associated with cognitive or behavioral disabilities. Seizures in association with HME often begin in early infant life including an association with infantile spasms. Hemimegalencephaly may occur as an isolated or sporadic brain malformation or it may be associated with other neurodevelopmental syndromes.”

As difficult as that news was to hear, Campbell, who is a sculptor and assistant professor in the Department of Art & Art History, was relieved to finally have a diagnosis and a plan. Then, at just seven months old, Emmett underwent a complete hemispherectomy – a procedure that involves disconnecting the effected side of the brain from the healthy side and removing a portion of the abnormal hemisphere.

“Because this sounds so incredible and upsetting, I like to tell people upfront that he is alive and well! Of course there are significant impacts from a surgery like that, but he’s a very happy child who is developing along his own unique path and is mostly seizure free,” Campbell said.

After doing all that research on her child’s rare disease, Campbell said she became captivated with neurons and the different jobs that they do.

“It was super fascinating and from an imagery standpoint, it resonated with my previous body of work. So I started drawing them first, and then in the spring after surgery, we started to come out of the fog – to come out of the trauma of being on constant seizure watch – and I just started creating little neurons out of air-dry clay, and it developed quickly from there. It was this really natural progression – at first, it was a kind of catharsis, like visually processing the trauma. Then I realized I could bring it back around to the environmentalism conceptual basis because that's where all the work begins. My previous work explored tree forms so the transition to neurons, with their branching dendrites, is not a far leap. So that's where we are now. It's been almost 3 years since the surgery and Emmett is evolving and developing and my artwork is evolving and developing, too, it’s a beautiful synthesis,” Campbell said. 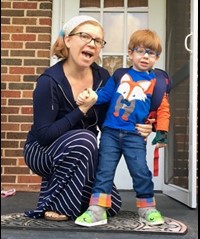 “I was one of those kids that knew from the time I was little that I was going to be an artist, and I was very lucky to have parents who nurtured my creative leanings all along the way. They remain my most enthusiastic supporters to this day. I can still recall how they leapt from their seats when I told them I had been offered the job at Auburn!” Campbell said.

Campbell is a sculptor who works primarily with clay in addition to various mixed media. Her work takes on many display forms ranging from the pedestal, wall, and floor to suspended installation work. More broadly, her work addresses the physiological and psychological relationship between humans and the natural world and critiques a culture that places profit and greed over the health of the environment and the safety of the people.

She received her BFA from the Department of Crafts and Material Studies at Virginia Commonwealth University in 2004, with a focus in ceramics.

Even though she knew that art was her passion, she didn’t quite know what kind of art she wanted to pursue until she went to college where a foundations class at Virginia Commonwealth University (VCU) helped her decide to go into 3D art. “That's where it started, and then I knew I wanted to go to graduate school just from being in the same space as the MFA students at VCU,” Campbell said.

She spent time between degrees participating in ceramics programs of various sorts in Italy, at Watershed Center for the Ceramic Arts in Maine, Maho Bay Clay Works in the US Virgin Islands, and Sugar Maples Center for the Arts in New York State. She was awarded her first solo show at the Gumenick Gallery in Glen Allen, Virginia in 2007. She received her MFA in Studio Ceramics from Indiana University, Bloomington in May 2010. In 2011 she was awarded a three-month International Emerging Artist Residency at The Scottish Sculpture Workshop in Aberdeenshire, Scotland.

Campbell loved the graduate program at Indiana University, Bloomington, and, similar to her experience at VCU, she realized she wanted to be a professor from observing the lives of her graduate school professors. Fulfilling her destiny as a faculty member, Campbell came to Auburn in 2016.

“When they are fired in the kiln, the organic material burns away, leaving a shell into which I insert the LEDs. I am currently learning how to solder and researching how to program Arduinos to create custom light patterns based on my son’s former seizure activity. The end goal for this current work is to have the viewer wear a portable EEG and control the light patters with their brain waves.”

To help manage the stresses associated with raising a child with additional needs, she took up embroidery as a hobby during the spring 2019 COVID lock down. She has recently begun to add stitching into her ceramic sculptures through the inclusion of wire and conductive threads to allow for the inclusion of light within the work. She uses the stitching to represent healing, as it is a reparative act.

Campbell’s work was featured in the journal The Lancet, Neurology and she contributed to the cover of the March issue.