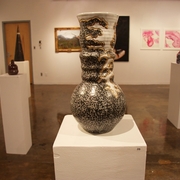 Students may drop their artwork at Biggin Gallery for submission to the exhibition on Tuesday, March 22 and Wednesday, March 23, from 10am - 6pm. Each artwork must be accompanied by a submission form included in the exhibitions prospectus, which is also available in the Department office in Biggin Hall, as well as the 3D Arts Building.

Her writings have been published in several publications for the Studio Museum in Harlem, including the catalogues Charles Gaines: Gridwork 1974-1989, When the Stars Begin to Fall: Imagination and the American South, The Shadows Took Shape, and Fore; Dirty Looks; and the International Review of African American Art. She has been a visiting lecturer and critic at the California Institute for the Arts (CalArts); Syracuse University; the Goethe-Institut, New York; the Rhode Island School of Design (RISD); Lower Manhattan Cultural Council; Hunter College, New York; the School of Visual Arts, New York; and the Maryland Institute College of Art, Baltimore, among others. She has also taught seminars on curatorial practice and contemporary art at Art Center College of Design, Pasadena and the Rhode Island School of Design.